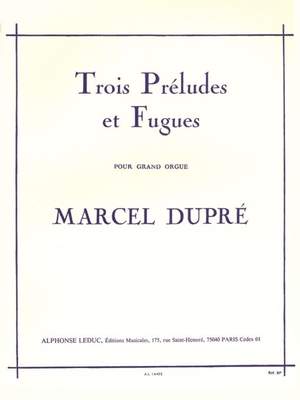 Written for upper-advanced organ players, Three Preludes and Fugues is a work by Marcel Dupré. Dedicated to René Vierne, this Op. 7 uses complex figurations and pedals. With such challenging difficulty, the first and thirdpreludes were pronounced_x001A_unplayable by Charles-Marie Widor due to their fast tempo, their figurations and the pedal chords. For a long time, Dupré himself was the only one able to play them. Marcel Dupré is a French organist whoreviewed some works by J. S. Bach, including The little Organ Book. He composed numerous pieces such as Lamento, Scherzo and Titelooze Tombstone, among others.