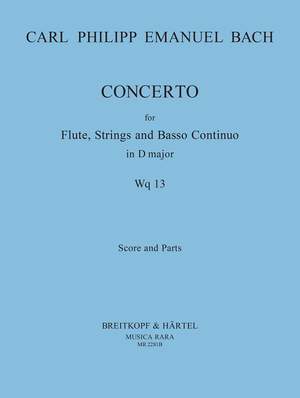 The work heretofore listed under "Wq 13/H.416" has been known as the Harpsichord Concerto in D major. However, the solo part is anything but idiomatic for that instrument, on which C.P.E. Bach was highly proficient. The collections of the Berliner Sing-Akademie, which are now accessible once again, offer proof that the work was originally a flute concerto. Ulrich Leisinger, who has been a peerless connoisseur of the oeuvre of this important composer for many years now, has prepared this first edition on the basis of the two surviving copies.