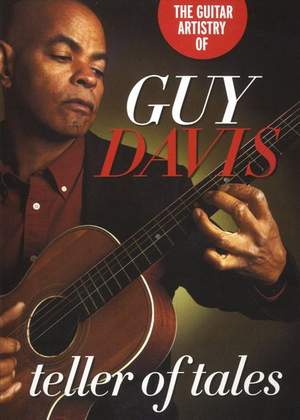 Whether Guy Davis is appearing on Late Night TV programs or nationally syndicated radio shows, in front of 25,000 people at Madison Square Garden, or an intimate gathering of students at a Music Camp, Guy feels the instinctivedesire to give each listener his 'all'. His 'all' is the Blues.

Guy can tell you stories of his great-grandparents and his grandparents, their days as track linemen, and of their interactions with the KKK. He can also tellyou that as a child raised in middle-class New York suburbs, the only cotton he's personally picked is his 'BVDs' up off the floor. He's a musician, composer, actor, director, and writer. But most importantly, Guy Davis isabluesman. The blues permeates every corner of Davis' creativity.

Throughout his career, he has dedicated himself to reviving the traditions of acoustic blues and bringing them to as many ears as possible through thematerial of the great blues masters, African American stories, and his own original songs, stories and performance pieces. In 1993 he performed Off-Broadway as legendary blues player Robert Johnson in Robert Johnson: Trick the Devil. He received rave reviews and became the 1993 winner of the Blues Foundation's “Keeping the Blues Alive Award”. Looking for more ways to combine his love of blues, music, and acting,Davis created material for himself. He wrote In Bed with the Blues: The Adventures of Fishy Waters -- an engaging and moving one-man show. The Off-Broadway debut in 1994 received criticalpraise from the New York Times and the Village Voice. Of Davis' live performance, one reviewer observed that his style and writing “sound so deeply drenched in lost black traditions that you feel that they must predate him. Butno, they don't. He created them.”

These days, Davis concentrates much of his efforts on writing and performing his Blues music. He has released nine albums for Red House Records, all of which have garnered rave reviews and