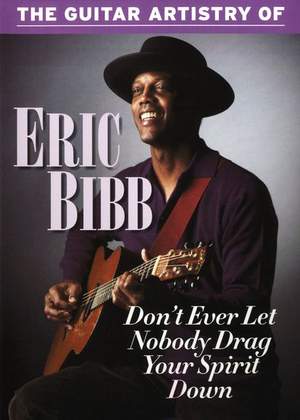 The Guitar Artistry of Eric Bibb

Don't Ever Let Nobody Drag Your Spirit Down

Eric Bibb was raised in the folk tradition, the son of the folk singer Leon Bibb. Bibb’s uncle was the world-famous jazz pianist and composer, John Lewis, part of the Modern Jazz Quartet. Bibb was raised in a music-filledhousehold, as family friends in the 1950s and 1960s included Pete Seeger, Odetta, Bob Dylan, and the late Paul Robeson, who was named Eric’s godfather. Bibb got his first steel guitar at age seven, and he got some advice fromDylan that he never forgot, to “keep it simple, forget all that fancy stuff.” When he was 16, his father asked him to play guitar in the house band for his TV talent show, Someone New.

In 1970, Eric left New York CityforParis, where he met with guitarist Mickey Baker. There he began to focus on blues guitar and after moving to Stockholm, he became enamored with prewar blues. A breakout performance at the 1996 London Blues Festival catapultedEric to a higher level of visibility. Since then he has toured the world, performing at concert halls and major festivals. He has toured with Robert Cray, Keb Mo, Corey Harris and even opened shows for Ray Charles.

Ericearned a Grammy nomination for his collaboration (with Taj Mahal and others) on the children’s record, SHAKIN’ A TAILFEATHER. His album PAINTING SIGNS was recognized by New Age Voice as a Finalist for Best Folk Album of 2001. Hejoined Maria Muldaur and Rory Block to record the gospelflavored SISTERS & BROTHERS, and then released FRIENDS, a collection of duets with Taj Mahal, Odetta, and others. He has been nominated for many W.C. Handy Awards in avariety of categories. Eric’s rich and sensitive vocals and lyrics provide a perfect balance to his fine fingerpicking technique. Purveying a beautifully realized and deftly accomplished soulful folk-blues, Eric has no problemblending various genres effortlessly, melding a traditional rootsy American style with a subtle, contemporary sensibility.