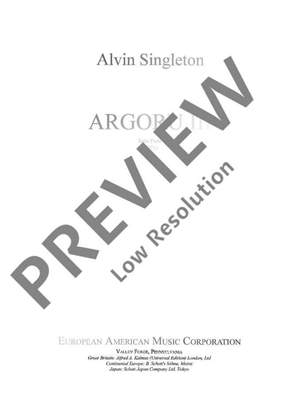 Argoru III (1971) for flute is the third in a series of eight solo works for various instruments, the term argoru being a word from the Ghanaian Twi language meaning to play (itself a pun). The work is in one short movement. Quicksilver runs and leaps alternate with cantabile moments like light falling through trees in a forest. The work at times seems to sound as if the flutist herself were creating the piece in a moment of inspired improvisation. The composer in fact says his intention was to “create a virtuosic tribute to a great flutist, allowing the piece to sound like her own personal statement.” To play “Argoru” with proper joy and abandon requires a flutist of great virtuosity. Such a player is Sara Vargas-Barritt for whom Mr. Singleton composed “Argoru III” and who premiered it on 24 May 1971 in Sprague Memorial Hall, New Haven, Connecticut, where the two were fellow Yale graduates.– Carman Moore