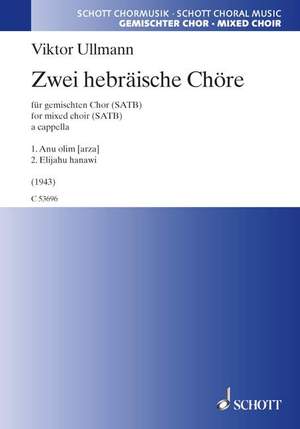 Viktor Ullmann composed his choral arrangements of Hebrew, Yiddish and Chassidic songs in the ghetto of Theresienstadt in 1943/1944. In the function of “Head of the Studio for New Music”, Ullmann made a significant contribution to the so-called “leisure activities” in the ghetto. The works were evidently intended for the repertoire of the various choirs at Theresienstadt, including children’s choirs such as the Karel Vrbas Youth Choir in which Ullmann’s son Max also sang. There is no evidence to confirm that Ullmann’s choral works were actually performed in Theresienstadt, for example in one of the frequent concerts given by Rafael Schächter’s choir of up to a hundred voices (cf. Milan Kuna, Musik an der Grenze des Lebens, 21998. p.313). The German translations below first appeared in the song book Makkabi-Liederbuch published in Berlin in 1930 (2nd edition 1935) which was available to Viktor Ullmann as a source for the melodies and text orthography for his choral arrangements in Theresienstadt.