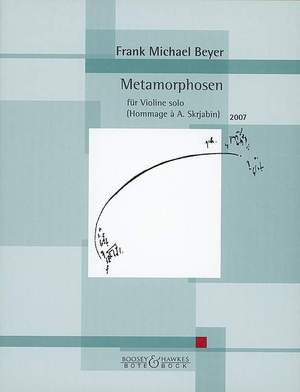 In 'Metamorphosen' - performed for the first time in March 2008 by Viviane Hagner at a Berlin gala concert marking the 80th birthday of the composer, only a few weeks before his death - Frank Michael Beyer refers to Scriabin's Piano Sonata No. 6 from 1911, a work the motivic and thematic penetration of which ahead of the serial technique had fascinated Beyer since his student days. Based on a scale found in Scriabin's works, Metamorphosen contrasts the frequently ecstatic nature of the piano setting with the linearity of the solo violin. The strict structure is contrasted by the music's free character which Scriabin himself described as 'volando - flying'.