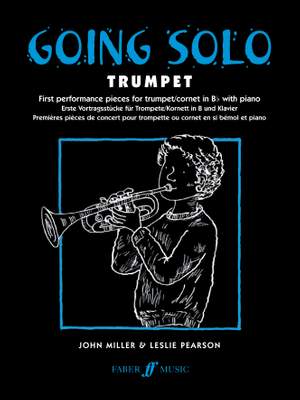 If you are preparing to face an audience for the first time - whether at home, at school, or on the concert platform - then you are ready for Going Solo. Spanning a wide range of repertoire from lively original material to imaginative arrangements, Going Solo offers a host of fresh challenges, and will be enjoyed by both player and audience alike. **Trinity College London selected pieces (Trumpet, Cornet, Flugel Horn 2010): All in a Garden Green or British Grenadiers (Trad.) Fairest Isle (Purcell) Tongue in Cheek (Pearson). **Trinity College London selected pieces (Euphonium, Baritone 2010): British Grenadiers (Trad.), Fairest Isle (Purcell), Tongue in Cheek (Pearson) Boydstudied music at the University of Sydney, where she was one of Peter Sculthorpe's first students. Her music is regularly performed world-wide. The hallmarks of her musical style are its transparency, gentleness and delicacy – attributes which reflect her long involvement with Asian traditions especially those of Japan and Indonesia.