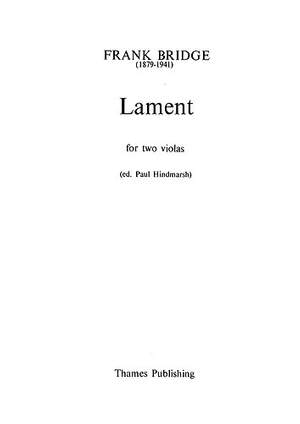 Bridge’s early works – those written before the first World War – were more late Romantic in style, warmly expansive, than his mature works. The Lament for Two Violas was written for himself and Lionel Tertis to perform at Wigmore Hall in March 1912. There were originally two pieces – Caprice and Lament – of which the first has been lost. Paul Hindmarsh has edited this sheet music from sketches and drafts.It is a deeply felt work, interweaving the near-human Voices of the Violas into a work that is more thoughtful than grief-stricken, yet no less effective for that.British composer Frank Bridge was active in the early decades of the 20th century and was a highly respectedconductor, violist and teacher – his sole composition student having been Benjamin Britten. Britten honoured his former teacher in his work Variations on a Theme of Frank Bridge, based on a theme from one of Bridge’s pieces for String quartet.