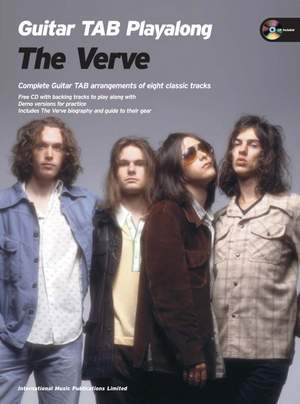 The Verve: The Verve Guitar Playalong

While Oasis and Blur battled for superficial chart supremacy at the height of the 'Britpop' phenomenon, Richard Ashcroft and The Verve set about creating some of the most poignant and touchingly personal songs of the decade.The Drugs Don't Work, Lucky Man and many others became anthems for a disillusioned generation, and paved the way for the likes of Coldplay, Snow Patrol and Athlete with songs that bridge the gap between introspectiveballad and dynamic stadium rock.

This book and CD set contains eight songs specially selected from The Verve's biggest hits, with full tablature transcriptions and a set of professionally-produced backing tracks thatallowyou to take the place of Nick McCabe. Both lead and rhythm parts are provided where appropriate - all you have to do is learn the songs and jam along with the CD! You'll even find a full biography and discography charting theband's career, and a guide to the McCabe's equipment and effects with hints to help you achieve an authentic Verve sound.