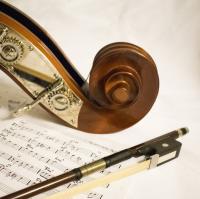 Viols are string instruments made of wood, belonging to the string family of instruments. Both the Viola d’amore and the Viola da Gamba belong to the Viol family; the Viola d’amore is played under the chin similarly to the violin and the Viola da Gamba played between the legs similar to a cello. The Viol was used most commonly in Renaissance and Baroque ensemble and consort music. Popular Viol compositions include works by J.S. Bach, Orlando Gibbons, Antonio Vivaldi, William Byrd, John Dowland and Henry Purcell.