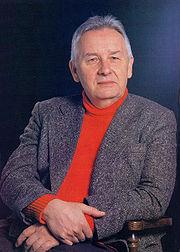 Henryk Mikołaj Górecki was a Polish composer of contemporary classical music. According to critic Alex Ross, no recent classical composer has had as much commercial success as Górecki. Górecki became a leading figure of the Polish avant-garde during the post-Stalin cultural thaw. His Webern-influenced serialist works of the 1950s and 1960s were characterized by adherence to dissonant modernism and influenced by Luigi Nono, Karlheinz Stockhausen, Krzysztof Penderecki and Kazimierz Serocki. He continued in this direction throughout the 1960s, but by the mid-1970s had changed to a less complex sacred minimalist sound, exemplified by the transitional Symphony No.