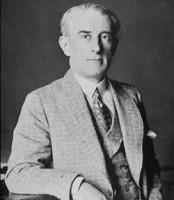 Joseph Maurice Ravel was a French composer, pianist and conductor. He is often associated with impressionism along with his elder contemporary Claude Debussy, although both composers rejected the term. In the 1920s and 1930s Ravel was internationally regarded as France's greatest living composer.

Born to a music-loving family, Ravel attended France's premier music college, the Paris Conservatoire; he was not well regarded by its conservative establishment, whose biased treatment of him caused a scandal. After leaving the conservatoire, Ravel found his own way as a composer, developing a style of great clarity and incorporating elements of modernism, baroque, neoclassicism and, in his later works, jazz.