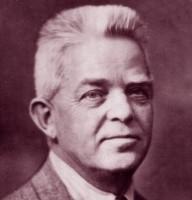 Carl August Nielsen was a Danish composer, conductor and violinist, widely recognized as his country's most prominent composer.

Brought up by poor yet musically talented parents on the island of Funen, he demonstrated his musical abilities at an early age. He initially played in a military band before attending the Royal Danish Academy of Music in Copenhagen from 1884 until December 1886. He premiered his Op. 1, Suite for Strings, in 1888, at the age of 23.