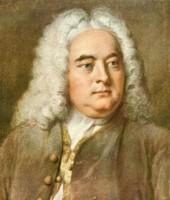 George Frideric was a German-British Baroque composer well known for his operas, oratorios, anthems, concerti grossi, and organ concertos. Handel received his training in Halle and worked as a composer in Hamburg and Italy before settling in London in 1712, where he spent the bulk of his career and became a naturalised British subject in 1727. He was strongly influenced both by the middle-German polyphonic choral tradition and by composers of the Italian Baroque.

Handel started three commercial opera companies to supply the English nobility with Italian opera. In 1737 he had a physical breakdown, changed direction creatively, and addressed the middle class and made a transition to English choral works.