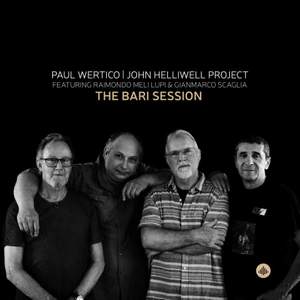 "I can't begin to adequately express how excited I am to have our first official studio recording, THE BARI SESSION, finally released! Ever since the very first time John, Raimondo, Gianmarco and I played together back in 2008, I've loved this band and knew we had that "special chemistry" that truly makes a band: A BAND.

However, since then, our only release thus far has been a double-CD entitled LIVE UNDER ITALIAN SKIES that features performances from two live concerts in 2008 & 2012. Due to our extremely busy individual schedules, and the fact that the four of us live in three different countries on two different continents, we've never quite found the ideal time and opportunity to actually go into a recording studio to officially document our band's sound, its chemistry, and some of the songs that have become part of our standard repertoire in live concerts.

Well, THE BARI SESSION has now arrived and it beautifully showcases all of those things (as well as some new compositions), because in August of 2019 we were able to find a small window of time to go in and record in a fantastic studio in Bari with a first-rate engineer during one of our Italian tours. I believe the result speaks for itself. We also had a really wonderful experience making this recording and the music just seemed to "play itself," which is always a great sign that the music is "ready" and "cooked to perfection," just like the best Italian dishes! Godetevi un buon ascolto! Paul Wertico

In 2019, I was working on my album "Ever Open Door" with Andy Scott, the arranger and composer. We decided to co-write a tune. Originally, the album's title was to have been "When I Was Young" which is the first line of the lyrics from the Supertramp song "The Logical Song". The next line in that song is "It Seemed That Life Was So Wonderful" so as it represents my general outlook on life, it felt like an appropriate title for a new tune. Very shortly afterwards, I toured Italy with Paul, Raimondo and Gianmarco where we included this tune in our performances. I am honoured that it was included in our MAST Studio session in Bari during this tour." - John Helliwell