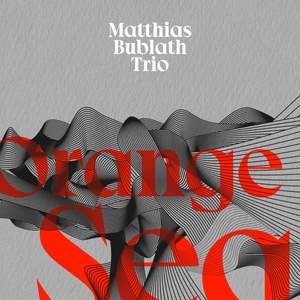 After almost a decade as a freelancer in New York, various solo and sideman projects, a Hammond trio and his celebrated and award-winning Eight Cylinder Big Band, the Munich pianist Matthias Bublath is now filling the classic syntax of a jazz piano trio with vital vocabulary . His stylistic "ducation transatlantique" plays a not insignificant role here: from gospel to Latin and funk, Bublath can spell out various jazz influences; but with the new trio we are also entering a pop culture associative reverberation room. Most Foul possibly alludes to the last great Dylan ballad "Murder Most Foul", which deals with the Kennedy assassination, but first has a quotation from Shakespeare transported across the Atlantic by a Danish prince. Is it a coincidence that Coltrane's Giant Steps keep resonating? Zapruder evokes those who documented the assassination attempt on Super-8 in Dallas. Is this the reverse of Miles Davis' score for Louis Malle's "Ascenseur pour l'chafaud"? Sherman Bros flirts with the swing of Disney's late '60s soundtracks. With a drum solo, Science Lab opens up the space for free melody testing. Samba Norte Sul is what it is (a samba for which a Munich native is still considered northern light), just like the monk ponk including walking bass and echoes of the dissolved stride piano and the slanted voicings in the slightly delayed timing of the sacred Thelonious . What Are You Doing For The Rest Of Your Life? a melancholy trio ballad probably poses the question of all questions, to which there can only be one answer: keep going like this. Bublath has his improvisational freedom secured by two colleagues who are stylistically at least as flexible. Peter Cudek, the Slovak bassist, agile, original and not averse to the melody and subtle virtuosity. And Christian Lettner, newly appointed professor for percussion in Munich, a long-time member of Doldinger's Passport and a sought-after drummer for countless projects ranging from jazz and classical percussion to pop and R&B, who can also allow blurriness in favor of the organic. Orange Sea - it could be a sunset on the American west coast, but also the reflection of napalm from the burning forests on the waters of Vietnam. Superficially almost a chorale, but in concept melodic straight-ahead jazz with a post-modern approach: stylistically each number stands for itself, as an album they result in an ambiguous and open fabric.