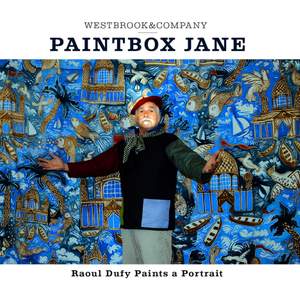 No one has succeeded in creating a more distinctive body of work than Mike and Kate Westbrook. Their mixture of jazz, music-theatre, poetry, street entertainment and visuals is rich and unique. — The Observer More…

Who Does What To Whom?

Art Perching on a Music Stave

** Customers who pre-order will receive a signed postcard from Mike and Kate Westbrook! **

Tim Goodwin plays Raoul Dufy, with Kate Westbrook, Martine Waltier and Billie Bottle on vocals, Alan Wakeman on saxophone, Marcus Vergette on bass and Mike Westbrook on piano. On the Promenade des Anglais in Nice, Raoul Dufy paints a portrait of his muse, Jane. A troupe of singers and instrumentalists conduct a lively exchange with the painter about the meaning of art, his place in art history, posterity, plagiarism, about his friendship with Henri Matisse. The dialogue continues in song and repartee until the sun goes down on the sea wall and night envelopes the sensual world of Monsieur Dufy.

'Paintbox Jane' was premiered in March 2016 at the Arts Club Vout-Oreenees in London. Over the next couple of years the show toured jazz clubs and studio theatres. The album was recorded by the late Jon Hiseman in his Temple Music Studios in May 2017. It has now been mixed and mastered by Ru Lemer.

Since winning the Edinburgh Festival Fringe Award in the late 1970s with their jazz cabaret 'Mama Chicago', composer Mike and vocalist/ librettist Kate have generated a succession of music theatre pieces. They have written for the stage, for television and radio, and toured with theatre, dance and opera companies as well as their own ensembles, throughout the UK, Europe and beyond. Much of their work has been released on CD.

No one has succeeded in creating a more distinctive body of work than Mike and Kate Westbrook. Their mixture of jazz, music-theatre, poetry, street entertainment and visuals is rich and unique.