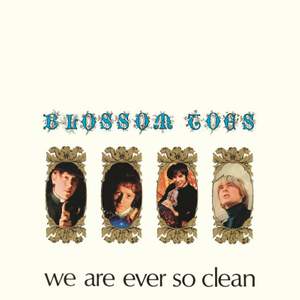 We Are Ever So Clean

Released in October 1967, ‘We Are Ever So Clean’ was the wonderful debut album by Blossom Toes, one of Britain’s most imaginative bands of the late 1960s. Originally known as The Ingoes, the band featured Brain Godding (guitar, vocals, keyboards), Jim Cregan (guitar, vocals), Brian Belshaw (bass, vocals) and Kevin Westlake (drums, percussion).

Signing to Giorgio Gomelsky’s newly formed Marmalade Records label in 1967, the band recorded their debut masterpiece throughout the Summer of that year.

Upon its release, ‘We Are Ever So Clean’ was described by Melody Maker as “Giorgio Gomelsky’s Lonely Hearts Club Band”, although this was unfair. While the album did indeed reflect the style of the burgeoning British psychedelic rock movement, the album revealed Blossom Toes to be an innovative and highly original work with such classic tracks as ‘Look At Me I’m You’ and ‘What On Earth’.

Sadly overlooked at the time of its release, ‘We Are Ever So Clean’ is now regarded as one of the greatest psychedelic rock albums ever made. This expanded Esoteric Recordings edition has been newly remastered and features 27 additional bonus tracks drawn from a live performance in Stockholm in August 1967, rare singles, demos and BBC sessions. The set fully restores the original album artwork and features a booklet with an essay featuring exclusive interviews with Brian Godding and Jim Cregan.