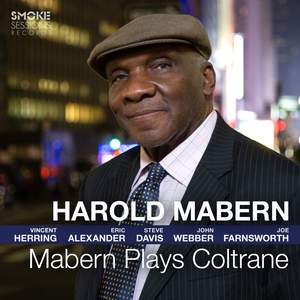 Rodgers, R: My Favorite Things (from The Sound of Music)

"Mabern Plays Coltrane" is the late pianist Harold Mabern's tribute to his hero and mentor John William Coltrane. Trane was a powerful influence on a young Mabern new to New York and they had many talks. Mabern recalled, "You would think somebody who could play like that, that kind of a genius, would be all. never stuck his chest out; just the opposite; very humble; never satisfied...He was very inspiring to be around then." Mabern is joined by some of his closest collaborators and proteges in tenor saxophonist Eric Alexander, alto saxophonist Vincent Herring, trombonist Steve Davis, bassist John Webber, and drummer Joe Farnsworth for this powerful posthumous release. These recordings were very important to Mabern but sadly he passed away suddenly in September 2019 before they could be released but not before he heard them. Nate Chinen described him in an obituary for WBGO as "a pianist of percussive fire and boundless soul, with a language that pulled from hard bop, post-bop, Memphis soul and the blues."