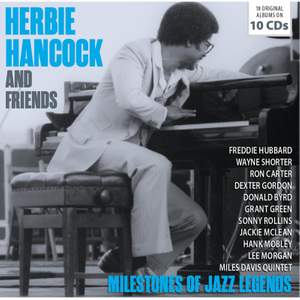 Herbie Hancock, born in Chicago on April 12, 1940, is one of the most successful jazz musicians of all time. His debut album "Takin' Off" (1961) opened with the hit "Watermelon Man" and paid off twofold, because he also retained the publishing rights. Starting in 1963, Hancock became a member of the new Miles Davis Quintet, which, with Wayne Shorter, Ron Carter and Tony Williams, became one of the eponymous groups of Modern Jazz. Hancock had already gained his first jazz experience in his hometown Chicago after a Wunderkind phase as a classical pianist with such greats as Donald Byrd and Coleman Hawkins. Influenced by the harmonic theories of local pianist Chris Anderson and Bill Evans, Hancock developed his own style, combining funky hard bop piano la Horace Silver with a more open harmonic approach. Based on his recordings with Donald Byrd, one can trace this rapid development. In addition to Hancock's first recordings, we have also selected recordings of his most important musician friends from his early days for this box-set: Freddie Hubbard, Wayne Shorter, Ron Carter, Dexter Gordon, George Coleman, Grant Green, Sonny Rollins, Jackie McLean, Hank Mobley and Lee Morgan and, as a comparison to the later Miles Davis Quintet, Davis' last recordings before Hancock joined the group.