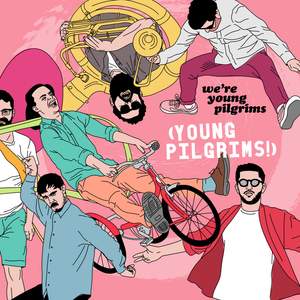 The production is exemplary. Notes are clear but not scrubbed of their personality. Honestly, We’re Young Pilgrims is meant to be experienced more than explained. — Downbeat, September 2021, 3 and a half out of 5 stars More…

Richard Foote, Steven Paul Smith: Everything Means Nothing to Me

Kieran McLeod: i of the Underground

Growing out of the thriving Birmingham jazz scene, Young Pilgrims have found themselves drawing fans from across Europe and beyond with their intense live performances - from beer-soaked dance floors to London's South Bank, the Paris Jazz Festival to Love Supreme Festival.

The Pilgrims' adventurous brass-heavy, rock-influenced sound is brought together by their explosive nine-strong line-up, featuring trumpets and trombones alongside the baritone sax, sousaphone and two drummers driving the band's high-energy rhythmic groove.

With improvising invention set against their infectious melodies, the band follow their 2016 debut (Little Things) with their first fully produced studio album - released 18th June on Stoney Lane Records - with an unorthodox tour reclaiming Britain's old bandstands, festivals and venue dates taking their imaginative music across the UK later in 2021 and into 2022.

Inspired by renegades, Scottish cities, skateboarding and even a brief and murky incursion into a local canal, We're Young Pilgrims features eight originals from frontman Richard Foote alongside fellow Scots Kieran McLeod and drummer Jonathan Silk, with striking new arrangements of music from Vulfpeck, Elliot Smith and D'Angelo. Canal Tripping is written in homage to trombonist Richard Foote's unfortunate plunge from his bike into one of Birmingham's canals, giving a nod to the now legendary passerby who saved Richard, his bike and his trombone from the depths of the waterways. Foote's Hall of Meat, meanwhile, takes its name from "a notorious and gnarly" Instagram page from Thrasher Magazine, as Richard writes: "a tribute to all the skaters out there, taking slams, getting smoked, bouncing back up and making some serious tricks." Silk's original Pilgrimage draws inspiration from the band's long-running residency at Birmingham's Hare & Hounds, whilst i Of The Underground (Kieran McLeod) is a subtle nod to an oft-missed piece of design circulating around London since 1916. The lowercase 'i' designed by Uruguayan-born Edward Johnston, for the famous original London Underground typeface, represents all renegades and non-conformists, with the music conjuring images of typewriters, train noises and the many characters encountered on the Tube.

The production is exemplary. Notes are clear but not scrubbed of their personality. Honestly, We’re Young Pilgrims is meant to be experienced more than explained.

Brass bands come in all shapes, sizes, and flavours nowadays, and Young Pilgrims’ second album release positions them firmly at the hipper and more sophisticated end of the market.