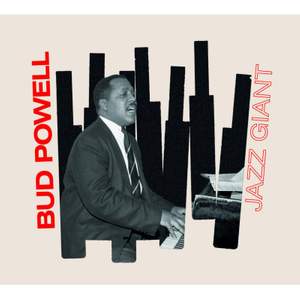 Limited edition CD housed in a 6-panel digipack with a comprehensive booklet.

This release contains the complete album Jazz Giant (Norgran MGN- 1063/Verve MGV-8153), which is widely regarded as one of the best of Bud Powell's career. As a bonus, this CD also includes a complete 1951 piano solo session featuring two of the Powell's best-known compositions: "Hallucinations" (issued as "Budo" on Miles Davis' nonet album 'Birth of The Cool' and 'Parisian Thoroughfare'.

"Faced with the choice of any single Bud Powell date to aptly represent his intense musical genius, choosing Jazz Giant would not be a bad bet. Culled from two sessions (spring 1949 and winter 1950) this Verve release showcases the master of bebop piano leading a trio - a setting in which he excelled. With impeccable support from bassist Ray Brown and drummer Max Roach, (substitute Curly Russell for Brown on the later date), an inspired Powell roars through a varied selection of original tunes and standards. Highly recommended!" - **** AllMusic, Lee Bloom