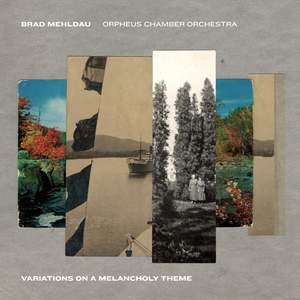 Variations on a Melancholy Theme

The recording of Brad Mehldau's 'Variations on a Melancholy Theme' features the pianist/composer and Orpheus Chamber Orchestra, who commissioned this orchestral version of the work, which comprises a theme and eleven variations plus a cadenza and postlude; the album also includes an encore, 'Variations 'X' and 'Y''. Mehldau originally composed 'Variations on a Melancholy Theme' for pianist Kirill Gerstein. Mehldau and Orpheus toured Europe, Russia, and the US with the piece, including a 2013 performance at Carnegie Hall. Speaking to the combination of classical form with jazz harmonies in the work's musical language, Mehldau wrote, 'I imagine it as if Brahms woke up one day and had the blues'.

Their secret lies in Mehldau’s ability to scale jazz riffs up to orchestral proportions while also condensing assertive orchestral statements into elegant but unconciliatory jazz piano phrases. The melancholia here is as much aesthetic as emotional, with a result that is dense, often dark and altogether remarkable.

As dark as it becomes, there’s always a generous slice of redemption in Mehldau’s work and this is no exception. The main theme is chamber-like, with hints of jazz, Beatles-ish pop and country music, quite reminiscent of the kind of tunes he wrote on 2010’s Highway Rider.