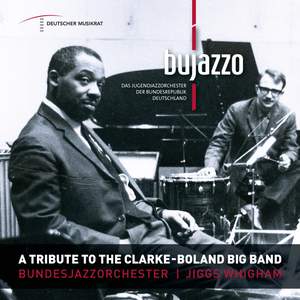 A Tribute to the Clarke - Boland Big Band

Herb Brown: You Stepped out of a Dream

Bernice Petkere: Lullaby of the Leaves

Jerome Kern, Darmon Meader: Smoke Gets in Your Eyes

Arthur Schwarz: Dancing in the Dark

Johnny Griffin: The Jamfs Are Coming

The Federal Jazz Orchestra, abbreviated and affectionately named BuJazzO by many, pays tribute to the legendary Clarke-Boland Big Band on its new CD. The legendary international ensemble existed from 1961 to 1972 in Cologne and was led by American drummer Kenny Clarke and Belgian pianist, composer and arranger Francy Boland.