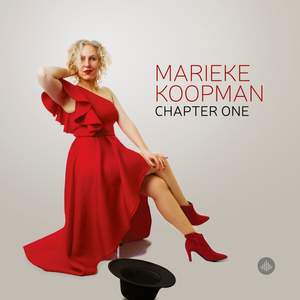 Mack Gordon, Harry Warren: The More I See You

George Gerschwin, Ira Gerschwin: Someone to Watch over Me

Rodgers, R: Everything I've Got Belongs to You

Cole Porters: I Get a Kick out of You

George Gerschwin, Ira Gerschwin: But Not for Me

Porter, C: Get Out of Town

Duke, V: Things Are Looking Up

Gus Kahn, Isham Jones: It Had to Be You

Rodgers, R: With A Song In My Heart

In the fall of 2019 Marieke embarked on an exciting new project. After performing for many years, she wanted to take a big new step into the music. She decided it was time to record her own cd. After finding a label and producer Marieke was energized to finally fulfill her dream. In choosing her repertoire, she was again reminded of why she decided to go into music: her love of stories, rhythm, and emotion in every style of music. She wanted to combine her roots in classical music with her own style and love of Jazz. She was reminded of a story from her grandfather being a very enthusiastic jazz drummer in the Swing-era. She finally understood her roots and especially in jazz from the early 30's until the late 40's. The theme of her debut cd was born.

Now she could finally work on her own sound. She chose jazz-standards (some known, others not so known) which had strong lyrics or were little gems melody wise and mixed them with her own style. Never being afraid of opinions or stepping out of the box, Marieke loves to transform songs and has found a way of communicating her emotions through playful rhythmic and melodic interpretations, improvisations, as well as her use of lyrical timing.