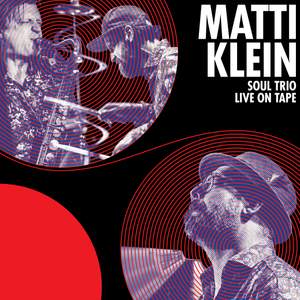 Known for the soulful jazz-grooves of their self-titled 2020 debut album, Matti Kleins Soul Trio actually began as an idea rather than a group. However, in early 2018 three master musicians met in Berlin's Lovelite Studio with producer/engineer Jochen Strh (Tony Allen, Ebo Taylor, Pat Thomas, Jimi Tenor) and recorded a set of well-planned and even better executed live sessions, each finding their desired space live and direct, locking into the immediacy of the groove. Soul Trio Live On Tape contains these very first sessions of the Matti Klein Soul Trio and comprises new arrangements of songs that had primarily been composed for Kleins band Mo' Blow; favourites already back then, timeless classics now thanks to these exciting deep-fried contemporary soul jazz versions. Their leader, known for his work as musical director for the Brazilian superstar Ed Motta as well as Mo Blow, can be heard on Wurlitzer and Rhodes Bass; Lars Zander (The Ruffcats, El Cartel, Lucasonic, STEREOFYSH) not only proves he is the most soulful tenor saxophonist in Berlin, but also why he has earned kudos for a bass clarinet sound that is enhanced with analog tape delays, Wah-Wah and Harmonizer-sweetenings; and drummer Andr Seidel also shows his chops, incorporating elements of rock, hip-hop, odd meter fusion and the sound of New Orleans into his own unique groove jazz style. As for the music, Rocket Swing is a tenor sax feature in which a hip-hop vibe meets a jazzy fifth fall, while Ray (dedicated to Mr. Charles) is a Meters-inspired shuffle in 7/8 time. No Particular Way showcases the funky side of the band, with singer Pat Appleton in top form over a wonderfully creaky Rhodes bass. Sunsqueezed is created in a wide compositional arc, evoking a ray of sunshine peeking through the clouds during a long and grey 10-month Berlin winter, giving hope for the next two months. Eleven Feels Like Heaven is a joyful, uproarious gospel blues with a brilliant odd meter drum solo. Grandpas Fairytale is a hitherto unreleased piece that is dedicated to the bandleader's grandfather, a former school headmaster who loved to read him stories and is a Wurlitzer-warmth meets bass clarinet groove in an atypical dynamic arc. Summarising their efforts, Klein states somewhat cryptically that the band rolls in a warm, soft couch whenever there is a risk of having to sit between the chairs. Initially available as a limited fan item only at live shows, this document is now being released officially with the addition of Grandpas Fairytale. It is a journey through time, absolutely contemporary and yet wonderfully back to the future.