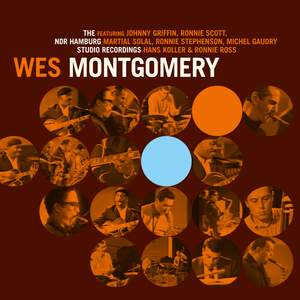 The American guitarist Wes Montgomery was one of the greats of jazz. For all friends of this style-defining musician and beyond, Jazzline presents the NDR Hamburg Studio Recordings for the first time and thus never before published. In addition to Wes Montgomery, the musicians Johnny Griffin, Ronnie Scott, Ronnie Ross, Martial Solal, Hans Koller, Michel Gaudry and Ronnie Stephenson took part in this session. A fascinating line-up! There is also a 34 minute Blu-ray of the band's rehearsals as a bonus, which includes five of the tracks.

In the spring of 1965 this outstanding guitarist had only three more years to live, as in 1968 Wes Montgomery passed away after suffering a heart attack. The European concerts, particularly the happy hours spent at the NDR-Jazzworkshop on April 30, 1965 in Hamburg, were probably among the best memories Wes Montgomery had of himself and of the great art he mastered so well. Simply a must have album!