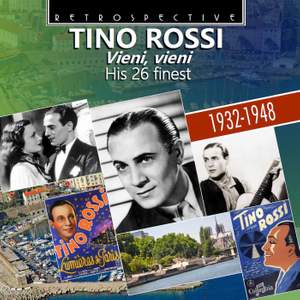 Tino Rossi (1907-1983) was the chanteur de charme par excellence, hailed as “the most famous Corsican since Napoleon”, and he is still numbered among the most popular French entertainers of all time. Vieni, vieni was both the title of his first big international success and of Retrospective’s survey of the 26 finest songs from his phenomenal ca reer. The romantic tenor began as a Corsican troubadour singing in French cabaret and on radio. But it was when his film career got under way that he became one of the country’s top idols. Marinella, Mia piccolina and Paris, voici Paris are among many hugely successful film songs, although all pale before the astonishing post-war triumph of Petit Papa Noël which became France’s Christmas national anthem. Rossi was also outstanding in opera (one critic favourably compared him to Gigli!), and his lyric tenor is a joy in arias from Le roi d’Ys, Manon and Les pêcheurs de perles. Few can melt the heart as readily as can Tino Rossi in Neapolitan songs such as Core ’ngrato, or such quintessential French repertoire as J’attentrai – and there’s even one song in English: Roses Of Picardy.