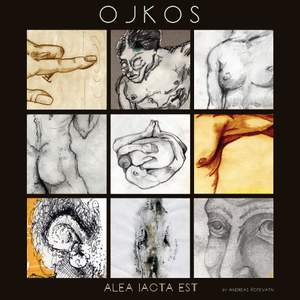 Julius Caesar crossed the Rubicon river along with his army in 49 BC he is said to have stated "Alea iacta est""The die is cast". Crossing this river with an army was prohibited and doing so was seen as a declaration of war. This expression has now become a synonym for reaching a crossroads where an important decision must be made, or passing a point of no return.

It was with a sense of having reached an important crossroads that Rotevatn began the process of establishing a jazz orchestra for composersOJKOSin the spring of 2018. After gathering four colleagues with a similar interest in both playing and composing, a call was sent out to find other artists in the Oslo area who would want to participate in the project. The resulting group of 16 musicians began rehearsing in the autumn of 2018, and in October OJKOSan acronym for "Orchestra of Jazz Composers in Oslo"held their first concert at Victoria Nasjonal Jazzscene. All of the music was composed by members of the orchestra.

This album takes the listener on a musical journey through different genres and moods. What happens when all 16 members of an orchestra have experience in thinking like a composer? The premise of OJKOS, in any case, is that when so many musicians are playing and improvising together the situation can easily become chaotic, but because they all have experience in thinking in a large format, OJKOS is adept at providing space when it is needed and using space when that is what the music requires. Then it becomes an organic and vital family of musicians who are working together towards a common goal of creating new music and discovering new methods of interacting.