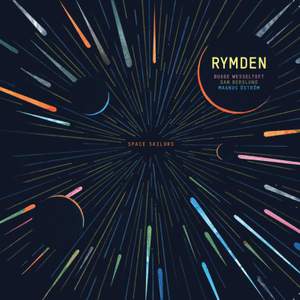 Switching between an acoustic piano trio and an electronic band, they draw on a wide range of electronic sounds and textures but what remains fixed is the exploratory zeal and musical inventiveness... — Jazzwise, October 2020, 4 out of 5 stars More…

Bugge Wesseltoft: The Life and Death of Hugo Drax

Öström: My Life In A Mirror

Öström: Free as a Bird

A trio of Scandinavian jazz heavyweights set a course for the stars on Space Sailors, embracing the sounds of psychedelia and krautrock along the way.

Rymden - Bugge Wesseltoft, Dan Berglund and Magnus strm - have launched their second mission, "Space Sailors". It is the perfect sequel to "Reflections and Odysseys", their highly acclaimed debut that spawned an equally acclaimed series of live performances. The trio have taken the dynamics, textures, moods, and perfect blend of subtle detailing and big sonic gestures to new levels, and have picked up new elements of 60s psychedelia and punk energy along the way. If you ever wondered what would happen if a Krzysztof Komeda score for a Polanski movie collided with Fugazi, look no further; if you need to know what Chopin writing doom metal might sound like, you might just find the answer you seek. The prog and fusion elements you already know and expect are still here, but with different colours and markings. If "Reflections and Odysseys" was a first expedition into earth orbit, "Space Sailors" goes far beyond. This just might be their "moon landing" album. Featuring a more diverse sonic palette, with electronic keyboards and various effects coming further into play, there would be a danger of the trio becoming reliant upon the trickery these things afford, but instead they are perfect garnishes to Rymden's musical recipe of core compositions rich in melody, deep exploratory soloing, and musical elaborations and in-the-moment re-imaginings. Some miniatures of just a minute or two long achieve epic grandeur, while longer pieces take us on determined peregrinations with variegated wonders to behold along the way, or extended meditations on a theme. And although each member has their (almost perfectly equal) share of individual composer credits, the overall signature is clearly RYMDEN. Their name is truly an aptronym, as it means space, with their musical arrangements as interstellar maps of the harmonic cosmos. Their playing plots unique navigational paths and orbits around celestial bodies of melody, atmospheric and moody proto-ambient nebulae, the searing heat of exploding supernova riffs, and the occasional asteroid belt of dissonance. Space Sailors, indeed! As with "Reflections and Odysseys", the track titles point to life as a world citizen, both as dweller and traveller, moments of serenity and introspection, a wicked sense of humour, and, of course, the music follows suit. That music, whether entwined around a hard-hammered gigantic riff or a complex tapestry of delicate and nimble-fingered counterpoint and thematic variation, is imbued with a warm, open and generous humanity. Although no confirmation of their status as a supergroup (in every sense of that eagerly applied but reluctantly worn title) was required, "Space Sailors" does so with intelligence, humour, wonder, seriousness, joy and seemingly uncontainable creative energy.

Switching between an acoustic piano trio and an electronic band, they draw on a wide range of electronic sounds and textures but what remains fixed is the exploratory zeal and musical inventiveness of the band. Willing to develop ideas and melodies as far as they can be taken without imploding, they are willing, on the spur of the moment, to respond to musical mood changes and directional shifts to create ever evolving sonic landscapes that develop into impressive castles in the sky.

Space Sailors makes for a quirky journey outside of jazz space, taking enough from rock-based styles - be it the musical ingredients themselves or their use of effects - while still balancing the three Scandi jazz veterans’ well-honed chops.