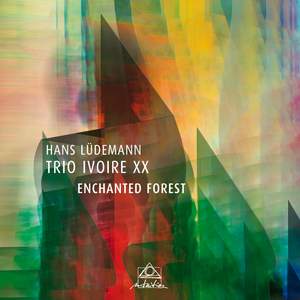 Trio Ivoire's twentieth anniversary record is a celebration of their well-honed fusion of West African music and European jazz, with new guest collaborators and intriguing arrangements to boot.

To celebrate the 20th anniversary of Trio Ivoire's unique synthesis of African and Western music, Hans Ludemann and the other members of the trio came up with a very special project that expanded the size of the group as well as its musical possibilities: the three men in the group are joined by three internationally known female jazz singers Simin Tander, Tamara Lukasheva, and Amanda Becker as well as Lisa Wulff on double bass and Alexandra Grimal on tenor sax.

Inspired by the polyphonic singing of the Aka people in central Africa, the independent patterns of the music on this CD grow together organically like tropical vines, creating ever-larger biotopes supported by a living pulse. Almost without words, the singers blend into the lush foliage of this "Enchanted Forest" that invites us to linger and listen, and which became the unifying idea of the entire Trio Ivoire XX project.

With its joyous and open atmosphere, the whole album is an ode to the forest, a sacred place that is vital to humanity's survival but also increasingly endangered. An extensive tour showcasing this project in several countries had been planned for early summer, but has now been postponed until later in the year. In these difficult times, we especially need music like this, which reaches across borders to celebrate our shared humanity and gives us courage to see the positive side of life.