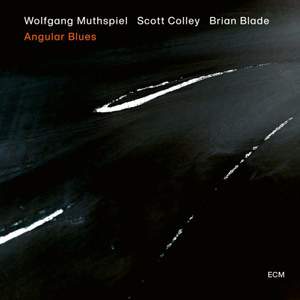 Despite its relaxed feel, Angular Blues offers intense musical sensitivity, keen, active interplay and improvisatory flair. With crystalline production and canny collaboration by three jazz masters,... — AllMusic, March 2020, 4 and a half out of 5 stars More…

Porter, C: Everything I love

Wolfgang Muthspiel, whom The New Yorker has called "a shining light" among today's jazz guitarists, returns to the trio format with Angular Blues, the Austrian's fourth ECM album as a leader, following two acclaimed quintet releases and his trio debut.

Like Driftwood the 2014 trio disc that JazzTimes dubbed "cinematic" and "haunting" Angular Blues finds Muthspiel paired with longtime collaborator Brian Blade on drums; but instead of Larry Grenadier on bass, it's Scott Colley, whose especially earthy sound helps give this trio its own dynamic. Muthspiel alternates between acoustic and electric guitar and, along with his characteristically melodic originals including such highlights as the bucolic "Httengriffe" and pensive "Camino" he essays the first standards of his ECM tenure ("Everything I Love" and "I'll Remember April"), as well as his first-ever bebop rhythm-changes tune on record ("Ride"). Angular Blues also features a single guitar-only track, "Solo Kanon in 5/4," with Muthspiel's electronic delay imbuing the baroque-like rounds with a hypnotic glow.

Despite its relaxed feel, Angular Blues offers intense musical sensitivity, keen, active interplay and improvisatory flair. With crystalline production and canny collaboration by three jazz masters, Angular Blues adds not only depth and breadth to Muthspiel's ECM catalog, it's weighty enough to own a chapter in the history book of jazz guitar trios.

Angular Blues features Muthspiel at his most orthodox, and the routine of guitar-bass-drums solos on most tracks reinforces that impression. But it’s a unique collection of personal statements by a very classy contemporary trio too.

His latest dispatch for [ECM] displays to full advantage his fingerpicking precision, attractively beady tone, melodic abilities and attention to group dynamics that gives his repertoire drama, color and shape… This is a well-played record; not earthshaking, innovative or especially challenging, but sure to interest guitarists and guitar aficionados.