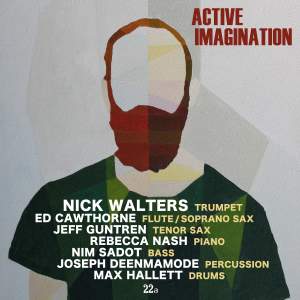 Trumpeter and composer Nick Walters returns to 22a with his second mini-album for the label - a free and spiritual journey of avant-garde leaning jazz. <p>'Active Imagination' is a result of the bringing together of musicians for a day in the studio, with minimal rehearsal, to collectively experiment and improvise in the moment - in contrast to the more composed and structured recordings of the Paradox Ensemble album 'Awakening' from January 2019. All musicians contributed their distinctive individual voices, creating a united force of spiritual, freeform jazz. <p>Each composition is based on a different mode, all with their own distinctive flavour: "So Long Chef" nod's to Coltrane with its chords jumping by major thirds, before a more static middle section, offering a chance for Walters + Jeff Guntren (tenor sax) to explore the lydian mode. <p>"Ahimsa" is a meditative reflection and group improvisation, based around a simple theme in the mixolydian mode, resulting in a spiritual journey steered by Rebecca Nash's hypnotic piano solo. <p>"Gordian Knot" was conceived as a vehicle for Ed Cawthorne (aka Tenderlonious) to cut loose on soprano sax in the phrygian mode, which he achieves with devastating effect, backed up by Nim Sadot's infectious bass hook and complimented by an equally striking trumpet solo from the band leader. <p>Finally, "Dansoman Last Stop" uses the dorian mode to channel the spirit of a bustling travel interchange in southern Accra, Ghana, conceived further by another exquisite trumpet solo from Walters. <p>"Mr Walters, an OG and incredible musician. Very happy to see this album on 22a. Fundamental in UK jazz." - <b>Kamaal Williams</b> "Nick is accessing something spiritual in this record, way deeper than any cat who thinks just buying a dashiki is enough. He's thoughtful, he's true, he's the real deal." - <b>Emma-Jean Thackray</b>