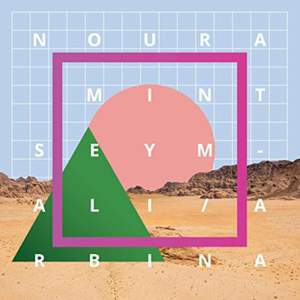 180gr. Heavyweight Gatefold LP including download code <p> Noura Mint Seymali hails from a Moorish musical dynasty in Mauritania, born into a prominent family of griot and choosing from an early age to embrace the artform that is its lifeblood. Yet traditional pedigree has proven but a stepping-stone for the work Noura and her band have embarked upon in recent years, simultaneously popularizing and reimagining Moorish music on the global stage, taking her family's legacy to new heights as arguably Mauritania's most widely exported musical act of all time. Gamely wielding the griot's idiom, a form itself distilled from centuries of trans-Saharan musical knowledge, Noura Mint Seymali's sound as heard on this record carves out a unique position in the musical cartography of West Africa, at once her country's leading proponent of the avant garde and yet a rigorously devoted tradition-bearer. <p> Arbina is Noura Mint Seymali's second international release. Delving deeper into the wellspring of Moorish roots, as is after all the tried and true way of the griot, the album strengthens her core sound, applying a cohesive aesthetic approach to the reinterpretation of Moorish tradition in contemporary context. The band is heard here in full relief; soaring vocals and guitar at the forefront, the mesmerizing sparkle of the ardine, elemental bass lines and propulsive rhythms swirling together to conjure a 360 degree vibe. Arbina refines a sound that the band has gradually intensified over years of touring, aiming to posit a new genre from Mauritania, distinct unto itself; music of the "Azawan." <p> Supported by guitarist, husband and fellow griot, Jeiche Ould Chighaly, Seymali's tempestuous voice is answered with electrified counterpoint, his quarter-tone rich guitar phraseology flashing out lightning bolt ideas. Heir to the same music culture as Noura, Jeiche intimates the tidinit's (Moorish lute) leading role under the wedding khaima with the gusto of a rock guitar hero. Bassist Ousmane Tour, who has innovated a singular style of Moorish low-end groove over the course of many years, can be heard on this album with greater force and vigor than ever before. Drummer/producer Matthew Tinari drives the ensemble forward with the agility and precision need to make the beats cut. <p> Many of the songs on Arbina call out to the divine, asking for grace and protection. "Arbina" is a name for God. The album carries a message about reaching beyond oneself to an infinite spiritual source, while learning to take the finite human actions to necessary to affect reality on earth. The concept of sbeu, or that which a human can do to take positive action on their destiny, is animated throughout. While final outcomes rest in the hands of the creator, the duty to use one's capacities as a human to work towards our hopes and highest intentions roots us in life and relationship to God. The title track 'Arbina' applies this concept to specifically empower women in their decisions about preventative healthcare. It advocates for the concrete task of early screening to prevent breast and uterine cancer, sickness that claimed Noura's own mother at a premature age, while offering an appeal to the ultimate benevolence of God. "Ghizlane" invokes the concept through metaphor, describing the elusive nature of our dreams and the innate obligation to follow. "Richa" reflects of the power of music as a vehicle. <p> Lyrically, the Moorish griot tradition is complex and associative. Poetry is held in a continuum between author and audience in which a singer may draw on disparate sources, selecting individual lines here or there for musicality to form a lyrical patchwork expressing larger ideas via association. A griot may relate her own thoughts and poetry, sing poetry written for and about her by a third party, and transmit lines from one party addressing another in the course of a single song. With this ever-fluid narrative voice, stories are told. <p> Arbina is a musical act of devotion, calling upon the creator to channel grace through us and uplift our actions. <p> Noura Mint Seymali: voice, ardine, songs Jeiche Ould Chighaly: guitar Ousmane Tour: bass Matthew Tinari: drums <p> Mayassa Hemed Vall: backing vocals (tracks 5 & 6) <p> Produced by Matthew Tinari Recorded & mixed by Tony Maimone at Studio G, Brooklyn, NY