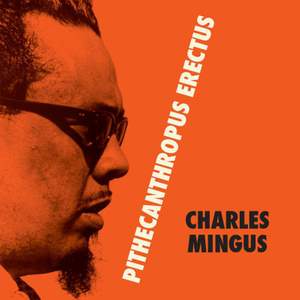 This 1956 Atlantic album by the highly influential and revolutionary jazz musician, composer and arranger Charles Mingus is generally recognised as the man’s first attempts at recording music according to his principles of individual player improvisation within Mingus’ own defined framework, comprising both musical definition and, equally importantly, feel. What is also particularly notable about this album and, in particular, in its legendary title piece, is that it is possible to detect (in the composition and playing) Mingus’ conception and belief that all forms of music, in particular jazz and classical, should be fused into a single form, a concept that he would take to its ultimate conclusion on his later masterpiece, The ‘Black Saint And The Sinner Lady’.

According to Mingus’ liner notes, the title song is a ten-minute tone poem, depicting the rise of man from his hominid roots (Pithecanthropus erectus) to an eventual downfall due to “his own failure to realize the inevitable emancipation of those he sought to enslave, and his greed in attempting to stand on a false security.” The song’s title translates into “Upright Ape-Man”, which holds a dual meaning with “upright”, referring to Mingus’ bass. Includes a live version of album track ‘Love Chant’ recorded at Cafe Bohemia in New York in December 1955.