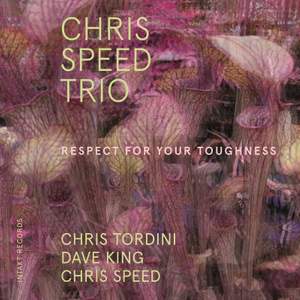 Respect for Your Toughness

In the liner notes, Peter Margasak describes the group as having reached a state of “preternatural ease, where technique, study and consciousness fall away and the spirit takes over.” You can... — Jazzwise, February 2020, 4 out of 5 stars More…

Kay Swift: Can This Be Love?

Chris Speed: Respect for Your Toughness

Chris Speed: Tenor Saxophone; Chris Tordini: Acoustic Bass; Dave King: Drums. Since arriving in New York in the early 1990s, Chris Speed has become one of the most vital improvising musicians on the scene through work that has always varied widely, moving from a jazz base out through various forms of folk, classical and rock music. Over the last six years the reedist has been sorting through the varied strands of his circuitous, decades-long career, using his versatile trio with bassist Chris Tordini and drummer Dave King to transform numerous curiosity-led excursions past the porous boundaries of jazz into a meticulously focused sound that ties it all together with his foundational immersion in the tradition. In his various bands and collectives, he has explored plenty of rigorous hybrids situating his buoyant, increasingly aerated sound on tunes deftly adapting ideas from Eastern European folk, electronic dance music, and rock, but with this trio he?s embraced the inspirations that set him on that twisting path without letting go of the knowledge he?s gleaned along the way. The group has reached a new apotheosis of those ideas on Respect for Your Toughness. As with the trio?s previous two albums, there?s a standard sprinkled within indelible originals. Speed seems to have found a powerful sweet spot with his trio, achieving that preternatural ease where technique, study, and consciousness fall away and the spirit takes over.

In the liner notes, Peter Margasak describes the group as having reached a state of “preternatural ease, where technique, study and consciousness fall away and the spirit takes over.” You can hear it. There’s a masterful subtlety to the whole set.