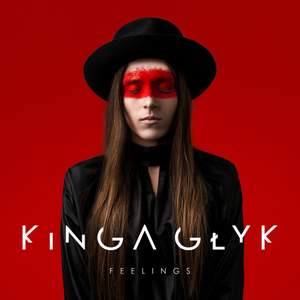 Kinga Glyk: Intro to What Is Life

Kinga Glyk: What Is Life

21 year old Polish bass player Kinga Glyk is one of the leading jazz artists of her generation. She began her adventure with music at the age of 12 playing in a family band called Głyk P.I.K. TRIO. She has performed not only in her native Poland but also in countries such as Indonesia, Austria, Germany, Switzerland, Italy, Portugal, Slovakia, the Czech Republic and Ukraine. In June 2016 a video of Kinga performing Eric Clapton’s „Tears in heaven” has been posted by BASS PLAYER UNITED on Facebook reaching the amount of 20 million views. Kinga has performed with: Tim Garland, Nitai Hershkovits, Greg Hutchinson, Jnr Robinson, Bernard Maseli, Ruth Waldron, Natalia Niemen, Apostolis Anthimos, Leszek Winder, Paweł Tomaszewski, Grzegorz Kapołka, Joachim Mencel, Arek Skolik, Mateusz Otremba (Mate.O), Marek Dykta and Piotr Wyleżoł.

“I can’t sing that well, that’s why I play bass,” says Kinga Glyk. This sounds suspiciously modest considering the hype that has surrounded her for the past two years. And yet with these words, the bass guitarist from Poland succinctly sums up what her new album Feelings is all about. With unparalleled artistry and nonchalance, she lets her bass guitar tell stories. Sensitive and penetrating, rich in nuances and strong in grooves, she summons up feelings. They strike a chord with Kinga Glyk’s listeners, conjure up personal stories and reflect the personality of this hugely talented young woman. Then there is her courage to experiment, to try something new, to become happy against all the rules. “As a child, I was interested in the bass guitar because it gave me an unusually powerful voice that I didn’t have at the time,” Kinga reflects on her beginnings as an instrumentalist. “In the meantime, its sounds have become my actual language in which I can express my feelings much more intensively.” Undoubtedly! But her bass playing is not about going higher, faster, further. Kinga Glyk doesn’t play music for musicians, but for the many tens of thousands of souls she has touched in the course of her still young career with her storytelling on the bass. Her stories reveal her extremely open-minded, loving and compassionate view of the world. In short, the twelve tracks of her new album are intrinsically human. And that is what makes Feelings so unique.

Kinga Glyk describes Feelings as her most personal work to date. A look at the list of authors of the new tracks reveals why: seven songs were written exclusively by her, two she wrote together with her pianist and producer Pawel Tomaszewski. “In contrast to my last album Dream, my band and I didn’t just improvise in the studio,” Kinga describes the creation of Feelings. “Before we started recording this time, I had worked out my compositions in more detail.” Not that Kinga’s music sounds too cerebral as a result. On the contrary, in the opening song “Let’s Play Some Funky Groove” she creates plenty of stirring moments to warm things up. Her fingers hardly hold still, want to snap to the beat in her evocative and organic interpretation of the Minneapolis sound, before the piece segues right in the middle to live drum’n’bass. “Lennie’s Pennies”, originally by Lennie Tristano, becomes a groove monster in Kinga’s interpretation, revealing her trio in its essence: brilliant solos, refreshingly cliché-free improvisation, and tight ensemble playing. Marcus Miller’s keyboarder Brett Williams sets the “Joy Joy” funk on fire together with Kinga, and cracks the whip with jazzy rock’n’roll in “Mercy” (Duffy). The keyboarder and self-proclaimed “dance music artist” Anomalyie, from Montreal, gives funky form to Kinga’s “5 Cookies” with his “Superfreak” (James Rick) riff.

In “What Is Life”, the core piece of Feelings, Kinga Glyk asks: “Who would we be without feelings? They let us experience so much, they teach us, sometimes bringing pain, sometimes joy. Emotions – without them, we would be empty. Words aren’t always able to express our feelings ... but music is.” Her spoken-word intro is followed by the musical version of her experience turned credence. She combines her free approach to jazz with breathtaking narrative moments based alternately on R’n’B and folk. The journey of Kinga’s new album Feelings ends with “Enu Maseti”, a ballad in a fantasy language that once again embodies the uniqueness of this album: big emotions do not contradict improvisation; in fact, they encourage freedom and breaking with convention. For some time now, Kinga Glyk has been a role model in this regard. For about two years she has garnered the attention of fans, TV and radio producers, YouTube users, journalsits and festival and club organisers alike. You literally get goose bumps when she plucks and strikes the steel strings of her bass guitar. And not so much because this hugely talented soloist is a young woman in a male-dominated circle of instrumentalists, but because Kinga Glyk exemplifies autonomy on the bass. And Feelings is the temporary apex of her work.