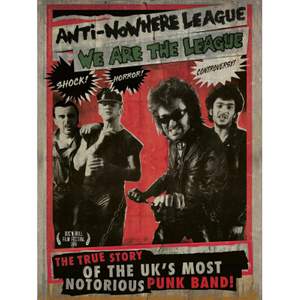 Anti-Nowhere League - We Are the League (dvd+cd)

<p><i>ANTI-NOWHERE LEAGUE: We Are The League</i> tells the full uncensored story of how a biker, a skinhead, a grammar school boy and a Persian exile came together, with no musical talent or ambitions and even less respect for anything or anyone, to burst into the UK charts with their debut single.</p> <p>Even when judged by the often confrontational standards of U.K. punk, the Anti-Nowhere League were a band committed to offending people. Looking less like a group of bohemian rebels than an especially unsavory biker gang eager to stomp someone, the Anti-Nowhere League made an immediate impact when they burst onto the British rock scene in 1980. They were heroes to hard-boiled U.K. punks, and to nearly everyone else they were an affront to all decency - which, of course, made the punks love them all the more.</p>