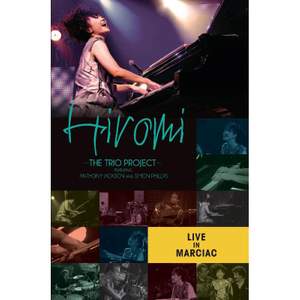 Featuring the power trio of Hiromi on piano and keyboards, Anthony Jackson on contrabass guitar and Simon Phillips on drums, this live concert DVD was recorded in July 2011 at the famed French festival 'Jazz in Marciac'.

The trio delivers a demanding set with repertoire from Hiromi's last studio album 'Voice' as well as her debut album 'Another Mind' which also featured Anthony Jackson on bass. With a running time of over 100 minutes, the DVD also includes a 20 minute bonus feature entitled "Five Days, Five Countries" filmed in Germany, Slovakia, Austria, Switzerland and Italy during the Autumn leg of the same tour.