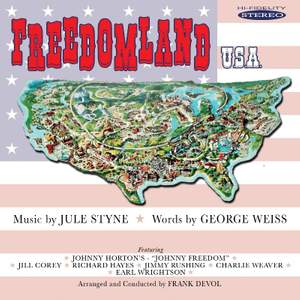 Freedomland U.S.A. was a Disney-like entertainment park in The Bronx, New York. To celebrate it's opening in June 1960, composers Jule Styne and George Weiss were commissioned to produce a souvenir album consisting of songs appropriate to the various park theme areas performed by Johnny Horton, Jimmy Rushing, Jill Corey, Richard Hayes, Charlie Weaver and Earl Wrightson. It is appearing here for the first time on CD, re-mastered and combined with rare bonus tracks performed by stars such as Ethel Merman, Peter Lawford and Jule Styne himself.