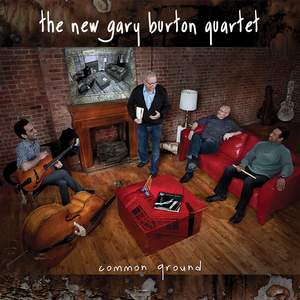 Gary Burton: Was It So Long Ago?

Antonio Sanchéz: Did You Get It?

Jarrett, K: In Your Quiet Place

On Gary Burton's debut release on Mack Avenue Records, 'Common Ground', the Grammy-winning pioneer of the four-mallet technique of playing the vibes, is not only delivering his first studio album since 2005, but is also introducing his latest band. Known as the New Gary Burton Quartet, the group is comprised of guitarist Julian Lage, bassist Scott Colley and drummer Antonio Sanchez. 'Common Ground' features 10 tunes, including six remarkable originals by quartet members as well as two impressive numbers by pianist Vadim Neselovskyi (a former Burton band member), a gem from the Keith Jarrett songbook and an intriguing arrangement of the standard "My Funny Valentine," spotlighting Lage. Well-known throughout his five-decade career for his quartets (beginning with his 1967 group featuring Larry Coryell, Roy Haynes and Steve Swallow), Burton is returning to the configuration for the first time since the mid-'90s. The quartet served as a reunion of Lage with Burton who has known the guitarist since he was a teen wunderkind and has featured him in his bands up until three years ago. "Julian has kept on growing and developing a sound of his own. He's a knock out." Burton says. Lage fills the quartet guitar chair that was once held by such rising-star six-stringers as Pat Metheny, John Scofield and Kurt Rosenwinkel, among others. Personnel: Gary Burton (vibes), Julian Lage (guitar), Scott Colley (bass), Antonio Sanchez (drums)