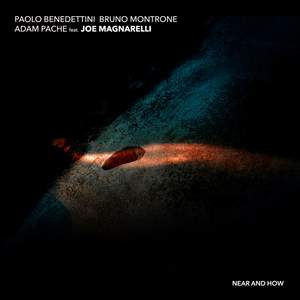 'Near and How' is an album documenting the long-standing musical partnership shared by bassist Paolo Benedettini, trumpeter Joe Magnarelli, pianist Bruno Montrone and drummer Adam Pache. The music recorded is a reflection of what they have come to achieve touring together: an aesthetic deeply rooted in the jazz tradition, filtered through the modern sound of New York today, with an emphasis on original compositions and a liberal take on tunes from the standard repertoire.

The quartet first came together in Italy, though individually the members come from far and wide: Magnarelli and Benedettini are based in New York, while Montrone lives in his hometown, Bari, Italy, and the Australian born Pache now lives in Rome. The title of the album, «Near and How» refers to their separation geographically by land and sea and the way they always manage to come together with a feeling of unity and cohesion on the bandstand - and now in the studio. This musical empathy is evident as the members navigate their way through Magnarelli's sublime composition, "Ballad For Barretto", as well as on more energetic, explosive tracks such as the minor blues, "Simone", where the drums take a lead role. The quartet enjoy taking risks and remaining open to where the music takes them while at the same time laying down some solid New York-style swing, as can be heard on Bill Evans' "Show Type Tune".

Joe Magnarelli, the featured soloist of the group, is without doubt one of the leading jazz artists on the trumpet today, having collaborated over the years with Harry Connick, Ray Barretto, Mulgrew Miller, the Carnegie Hall Orchestra and the Lincoln Center Orchestra, amongst many others. Paolo Benedettini, one of Sir Ron Carter's prized bass students, has held stage with a staggering list of jazz greats and is a master of constructing melodic bass lines. Bruno Montrone, the youngest of the aggregation, is a gifted soloist and also a skilled accompanist, with a flexible comping style that embraces every era of the music, integral to the sound of the group. On the drums, Adam Pache exhibits that for which he has become known: taste and musicality with a warm sound and a cymbal beat that is consistently driving, providing a cushion which the band can lean on.

The album was recorded mid-tour during the summer of 2016 at MAST Recording Studios in Bari and was engineered by Massimo Stano. The final stage of mastering took place in New York City in November 2016, with Michael Perez-Cisneros.

"AMP has a sense for quality music, this is jazz with a capital J" - Tor Hammero / Tor de Jazz (NO)

"An album that swings effortlessly " - Roald Helgheim / Dagsavisen (NO)

"It seems that these four musicians have found each other in a very good way. A nice record that swings impeccably." - Jan Granlie / Salt Peanuts (NO)