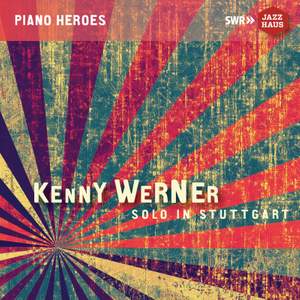 “An absorbing set from Werner, which for this writer inevitably brings to mind an equally impressive but totally different solo performance... the whole thing will be an object lesson to pianists... — Jazzwise, 4 out of 5 stars More…

Evans, B: Blue In Green

All the Things You Are (From "Very Warm for May") [Live]

Brubeck: In Your Own Sweet Way

In Your Own Sweet Way (Live)

This album contains a piano solo recital of Kenny Werner in Stuttgart (Germany) from 1992, live recorded. Born in Brooklyn, NY on November 19, 1951 and then growing up in Oceanside, Long Island, Kenny Werner began playing and performing at a young age, first recording on television at the age of 11. Although he studied classical piano as a child, he enjoyed playing anything he heard on the radio. In high school and his first years of college he attended the Manhattan School of Music as a classical piano major. His natural instinct for improvisation led Kenny to the Berklee School of Music in 1970. There he sought tutelage of the renowned piano teacher Madame Chaloff. Her gracious wisdom and inspiration became a driving force in Kenny’s conception: A music conscious of its spiritual intent and essence. From Boston, Kenny traveled to Brazil with the saxophonist Victor Assis Brasil. There he met Victor’s twin brother, Brazilian pianist Joao Assis Brasil. He studied with Joao, who provided another piece of the puzzle for Kenny’s conception that would lead to Effortless Mastery, his landmark opus on how to allow the master musician from within to manifest. Kenny Werner has been a world-class pianist and composer for over forty years. His prolific output of compositions, recordings and publications continue to impact audiences around the world.

“An absorbing set from Werner, which for this writer inevitably brings to mind an equally impressive but totally different solo performance... the whole thing will be an object lesson to pianists but ought to be of great interest to other improvisers.”