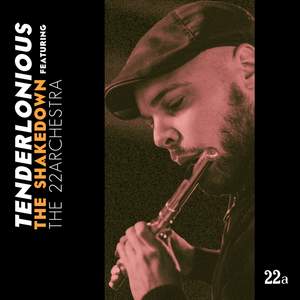 'The Shakedown' is Ed 'Tenderlonious' Cawthorne's debut LP and features a dream team of top talent he named the 22archestra, who he leads seamlessly throughout. Listeners are exposed to the full breadth of Cawthorne's technical and compositional skills, ranging from subtly meandering jazz, to hip hop, Afrobeat, Latin and exhilarating free form jazz.

The tracks include "SV Disco", a nod to the mighty Slum Village, is a chunk of sensually-contorted disco vibes that brings on full party mode instantaneously, with the slinky bass licks and pitch-bent synthesiser recalling Roy Ayres's blissed-out funk.

"Maria" showcases Ed's roots as sample-based producer, pulling influence from around the globe to create an undulating piece of flute-led Brazilian fusion that fans of Ruby Rushton will find familiar. The eastern-inspired embellishments raise the temperature further, whilst former Yussef Kamaal member Yussef Dayes' sizzling cymbals and shuffling snare work propel the track forwards, locking down a signature 22a groove.

The 22archestra was conceived after Tenderlonious was invited to record at Abbey Road Studios. The whole crew was rounded-up and the album was recorded during a single 8 hour session - a testament to their musicianship and ability to nail a take.

"(8/10) Jazz scene standout...the sound is a startling delight thanks to Tender's ability to marshal his crew to his step." - DJ Mag

"This is 100 per cent live-instrumental jazz, but it's also unmistakably London club music, with its heart in Dingwalls, Plastic People (RIP) and anywhere else people really dance to sophisticated sounds...it's music for a proper party." - Mixmag

"In 2018, Cawthorne is one of the musicians blowing new life into the London jazz scene...Cawthorne's take on jazz is a hybrid, involving hefty infusions of hip hop and hip hop-derived styles, and like Kamaal Williams, he is at the beat-centric end of the new-jazz spectrum." - **** All About Jazz