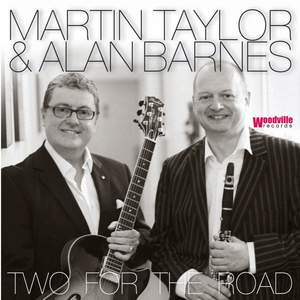 Two for the Road

Anne Ronnel: Willow Weep for Me

Trenet: I Wish You Love

Wrubel: Gone with the wind

Mancini, H: Two for the Road

In this inspired pairing, world-class guitarist Martin Taylor meets multi award winning reeds man Alan Barnes in an intimate duet setting. Taylor is, of course, known for his long association with Stephane Grappelli and his highly successful solo career including the recent 'Last Train to Hauteville' CD, which starred Barnes as part of his Spirit of Django group. Barnes is simply Britain's number one mainstream reeds player and concentrates solely on clarinet on this album.

The repertoire on the recording is wide ranging and unusual yet is complimented by two catchy and accessible originals from the pen of each player. Beautifully recorded at Castle Sound Studios, this disc sees the two musicians bring out the best in each other in an "after hours" session which, whilst clearly virtuosic, features some beautifully relaxed playing.