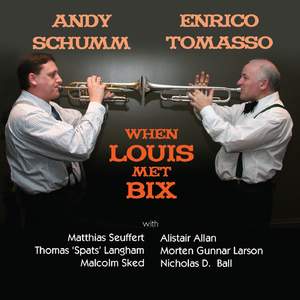 Richard M Jones: Who's It

Andy Schumm: When She Came to Me

The Vintage Recording Project was set up to replicate recording techniques used in the late 1920sand 1930s. Over six CDs the project has developed into looking at repertoire. In the early days of Jazz there were rumours of collaborations which have some basis in fact, but which have passed into folklore. One such collaboration was a jam session held following a meeting of Louis Armstrong and Bix Beiderbecke. Both men were young and both were already towering figures as Jazz musicians. The operation of non racial integration meant that the black player, Louis, and the white player, Bix, would not meet in the studio, but they did allegedly hold the out of hours Jam session when they were both in Chicago in 1928. We have tried to imagine that session using the leading Armstrong stylist, Enrico Tomasso (from the UK) and the leading Beiderbecke exponent, Andy Schumm (from the USA). They are supported by a band of specialists in vintage Jazz styles from the UK, Norway and Germany.