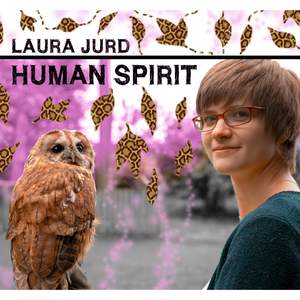 Laura Jurd: She Knew Him

Originally commissioned by the EFG London Jazz festival 2013, the album is made up of a series of pieces written to feature Dublin-born vocalist Lauren Kinsella. The songs enter the realms of rock and folk music whilst providing a platform for improvisation and creative dialogue between the musicians - all of whom have been hand-picked as some of the UK's most adventurous improvisers and instrumentalists. The record sees Laura playing alongside fellow trumpet player Chris Batchelor - best known for his work with Loose Tubes and his avant-trad band Pigfoot. On trombone is Colm O'Hara - an active member of the Irish improvised music scene and trombonist on Lauren Kinsella's album 'Thought-Fox'.

The unique, squawky honk of the bass sax, played by Mick Foster has a huge impact on the soundworld of the record. Think electric-Miles meets street band with a folkloric twist - the music often has a very English feel to it. Whilst there are many chorale-like moments reminiscent of the brass band tradition, Alex Roth's "skronky" electric guitar playing alongside the steady groove of the bass saxophone and drums gives the music an added dimension, sometimes taking influence from the UK's vast rock and pop heritage.