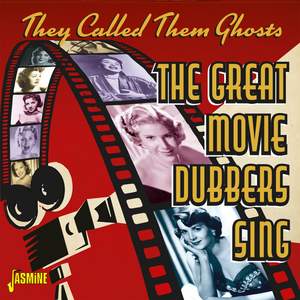 They Called Them Ghosts: The Great Movie Dubbers Sing

George Mitchell: Ace in the Hole

Billy Mure: Life of the Party

Kermit Goell: You Won't Forget Me

Walter Gross: When a Fool Falls in Love

Wilder, A: I'll Be Around

George Vance Magill: You're Like a Rose in the Rain

Robin, L: Two Hearts Are Better Than One

Jerry Joyce, Ray Allen: The Lord Is a Busy Man

Charles Haldeman: It Happened in Athens

Loesser: Now You See It, Now You Don't

Loesser: I've Got You

Scott, R: Singing Down the Road

Furniss Peterson, Hoagy Carmichael: My Christmas Song for You

As far back as the beginning of talking pictures, movie stars who couldn't sing were dubbed by a talented group of vocalists known as "ghost singers." These gifted people, both male and female, had to not only emulate the voices of the stars, but also follow where they breathed and how they moved, while also trying to copy their personalities. They did all of this, and in most cases, never even got credit.

This new CD is NOT a "greatest hits" compilation. Their most-famous songs are already available on various other soundtrack collections. This new Jasmine release focuses on the rarities and all are on CD for the first time. In addition to some actual soundtrack recordings never before released, we have also featured many performances that these "ghost singers" performed as themselves in their own styles.

As a bonus, you'll also find some tracks by Joan Crawford herself in a duet with her dubber India Adams, and even Marilyn Monroe in two duets with Eileen Wilson.