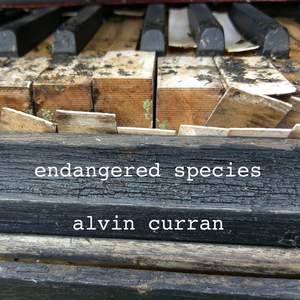 Green, Johnny: Out of Nowhere

Doc Daugherty, Ellis Reynolds: (I'm) Confessin' (that I Love You)

Carmichael, H: Georgia On My Mind

Blake, E: Memories Of You

Old French, Frankish, estendard “place of formation.” If you asked a jazz musician what he played, he’d probably say Standards and Originals. Standards being popular songs from Broadway or Hollywood, Originals being compositions written by the jazz players themselves. They became the catalysts for infinite extended play.... Alvin’s standards rise from an uncodified potential of all the sounds in the world. Recognizable but reformed by what had been worked through the nameless sound fields into a strange new life, now audible here.

- Clark Coolidge (from the liner notes)

The Yamaha Disklavier was the instrument I was waiting for ... a grand piano which allowed me the luxury of playing not just its own hammers and strings but my entire archive of sound-files: a magic act where the whole world becomes audible directly from my finger tips - an 80-proof blend of analogue and digital. The selection of songs on this recording is mostly ballads, slow and easy, leaving me time to think, exit into unverified neighborhoods, begin a piece from the end, enter a spontaneous museum of dysfunctional harmonies, sneak out the back door into the cocktail mists looking for traces of MEV street music in a heap of Pistoletto’s rags. - Alvin Curran